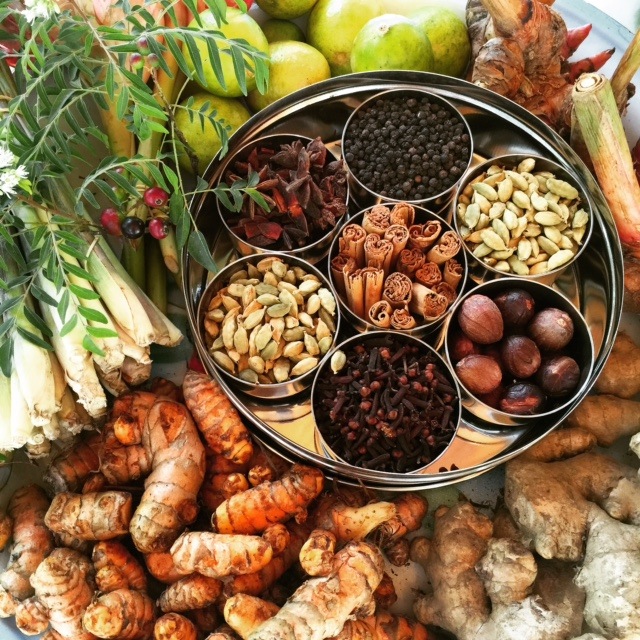 Pepper is probably the most well known spice. Its historical value was such that it was treated like gold. It was used as currency in the Middle Ages and used to pay rent and taxes. The term ‘peppercorn rent’ indicated ‘payment in full’, but today the term has become to mean ‘a nominal amount’.

Peper nigrum, a vine grown on tall stakes in a wigwam shape, is indigenous to the Malabar Coast, India, but was taken to Java by the wave of Hindu traders and colonists. It spread throughout the Far East. In Malaysia it was grown widely in the past here in Penang, but Sarawak is now best known for its wonderful quality pepper. Black peppercorns are green berries dried and raked until they shrink and wrinkle. White peppercorns are red and orange berries, packed in sacks, then soaked in slowly running water until the outer husks rot and can be sloughed off.  Green peppercorns are fresh, often freeze-dried or pickled in brine or vinegar.

Pepper is extremely versatile and is used at all stages of the cooking process, as well as a table condiment. Pepper enhances flavours and can be happily, often surprisingly, paired with sweet ingredients: try it ground on strawberries or pineapple. This tastes great! Specks of ground black pepper add interest to otherwise pale sauces.

Pepper stimulates the appetite, is thought to help in the preservation of cooked food when used in larger quantities, and if consumed in copious amounts, is also thought to help your body repel mosquitoes. 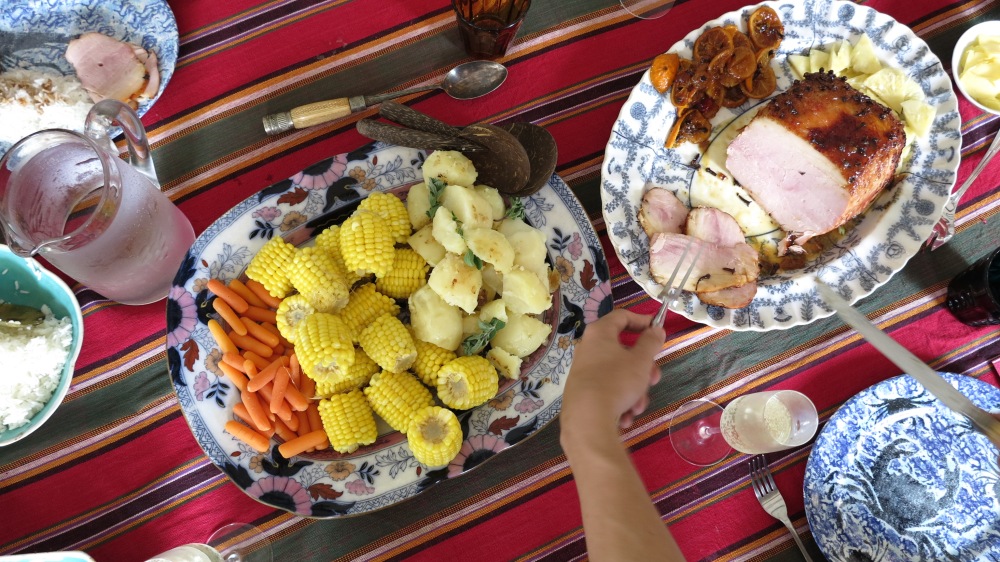 Spices have always traditionally been used at Christmas time to decorate and add flavour to the feast of food. Spiced tea and mulled wine are traditional cold weather drinks and here in the tropics, a heavily spiced chai tea is not only stimulating for the body but a good way to keep off colds and sinus troubles.

Here is a good easy recipe for a heavy current cake, very copiously spiced with ground pepper. I always get asked the recipe when I serve it and at last…. here it is!

It can easily replace the traditional sweet Christmas cake and in fact, I much prefer it. You could ice it with sugar and marzipan. I don’t, and wrapped in wide Christmas coloured ribbons or fabric, it looks an honest part of the festive table. When I make this cake, I make several in different sizes all at once. They can keep for months in the fridge & longer in the freezer. Fresh out of the oven, they are crumbly and served hot or cool, excellent with a dollop of good quality butter and a good citrusy homemade marmalade. Every time I make them, they disappear fast, brilliant with an afternoon cup of strong tea. It is a real energy giving food.

I’m afraid that I’m not good at using measures when I cook and in this recipe, no matter how much pepper I add ( and you start with a lot) the cake seems to be able to cope with the spice and it never seems too much. I do not use sugar in these cakes but some people do prefer them sweeter, in which case add a couple of spoonfuls of dark sugar. I find the raisins well sweet enough, and I use proper full cream butter, NOT margarine. I use eye and texture more than anything to gage if my mixture is right, so please do experiment a couple of times. You will find your ideal way of making this cake. This recipe will yield me two bigger and two smaller cakes, but you can divide the batter up into any size cake you like.

About 1 kilo + – of currents or raisins. I like using a mix of black & golden but either or, is fine too. 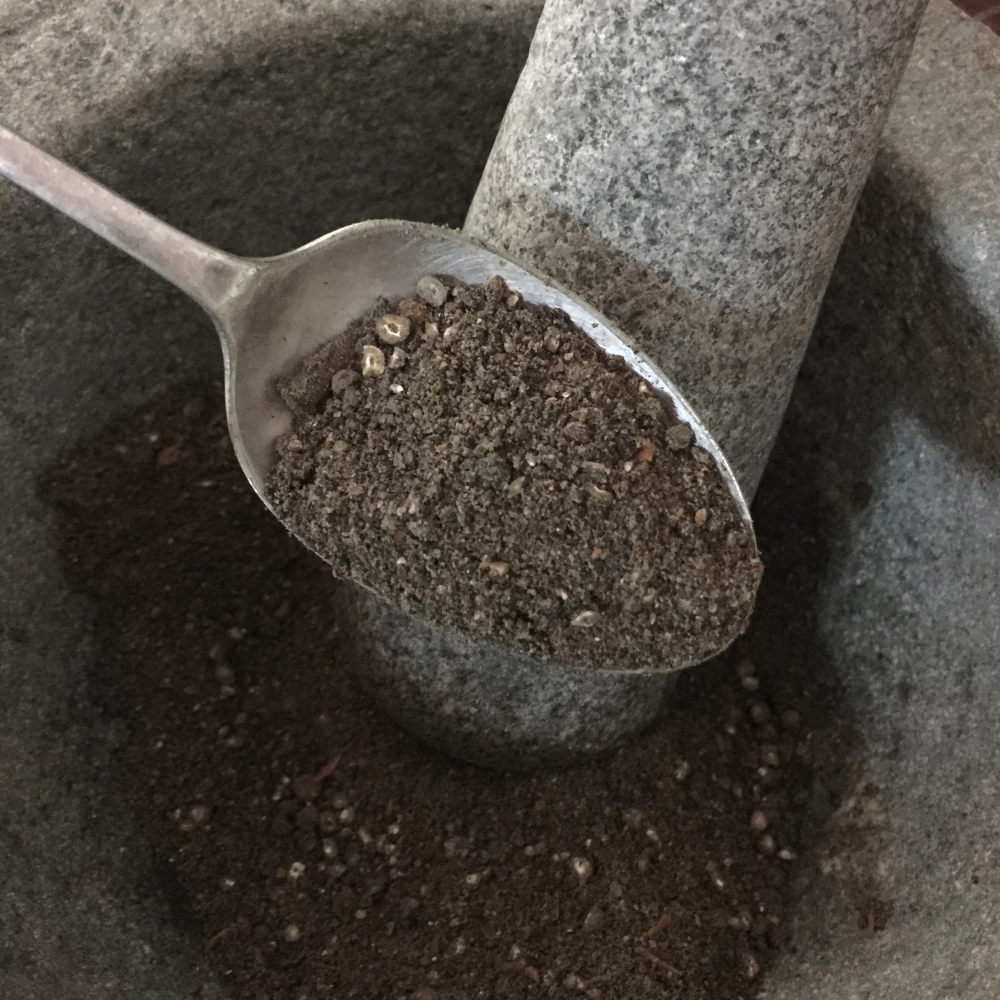 When you pound all the spices above together, the cloves and cinnamon need to be totally powdered, but the pepper left still a little ‘gritty’. You may have to do this in batches if your pestle & mortar set is small. The pounding really releases the flavour, but you can also put the spices in a grinder and whizz them.

-Put all your raisins in a big pot, pour in enough water so that the water level is just below the level of the raisins & currents in the pot. Add the lump of butter on top, cover & put on low heat until it boils. Take the lid off and let it all simmer nicely, the currents soften and the liquid is ‘creamy’ and opaque looking. Stir occasionally to make sure the butter is well mixed into the final liquid. About 45 minutes. Do not let it continue at a rolling boil as this will make the currents mushy.

-Grind and pound your spices while you wait for this. 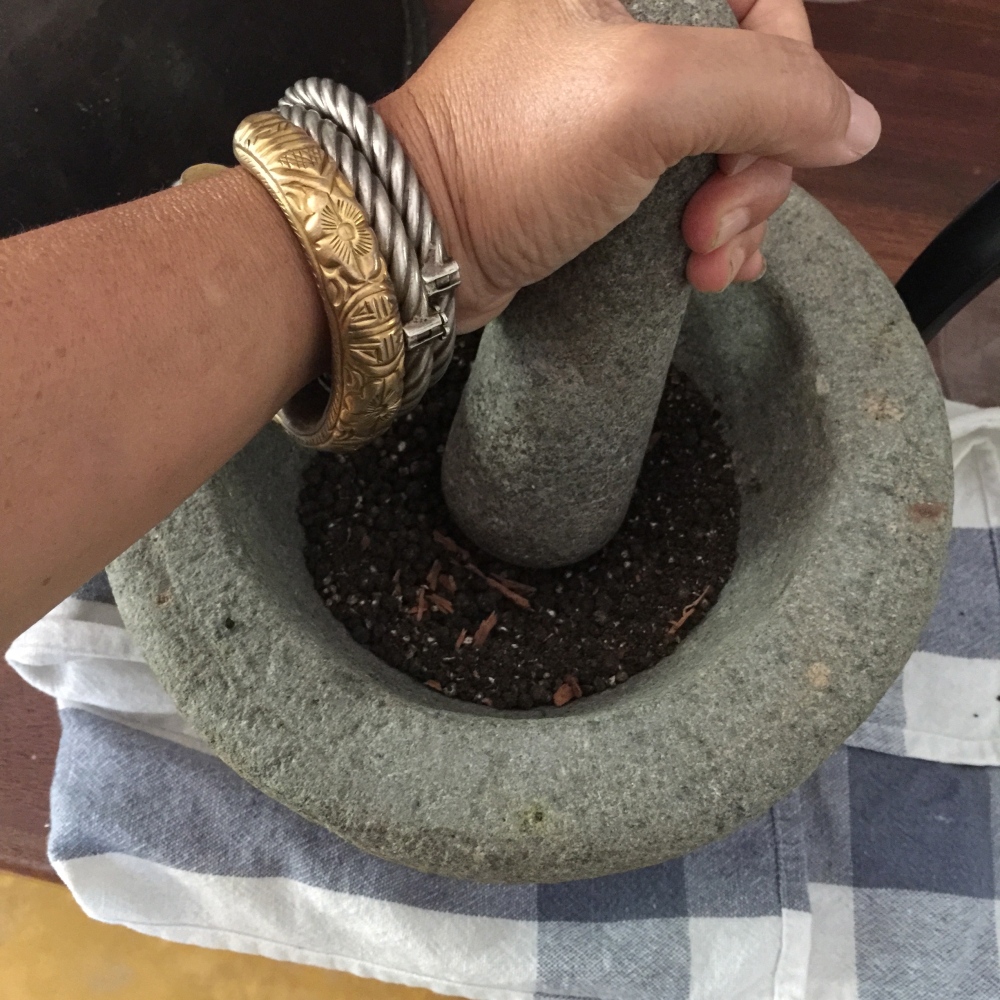 -Prepare your cake tins. Butter the bases and sides well. Put on the oven (mine is electric) to 180 degrees C.

-Once your currents have simmered, the pot should look a bit like this in the  photo below. The liquid is definitely there but is not overwhelming the currents. The currents look plumped but are not soggy. Throw in all your ground pepper and stir in well. Let the pot cool but make sure there is some considerable heat left for the next stage. 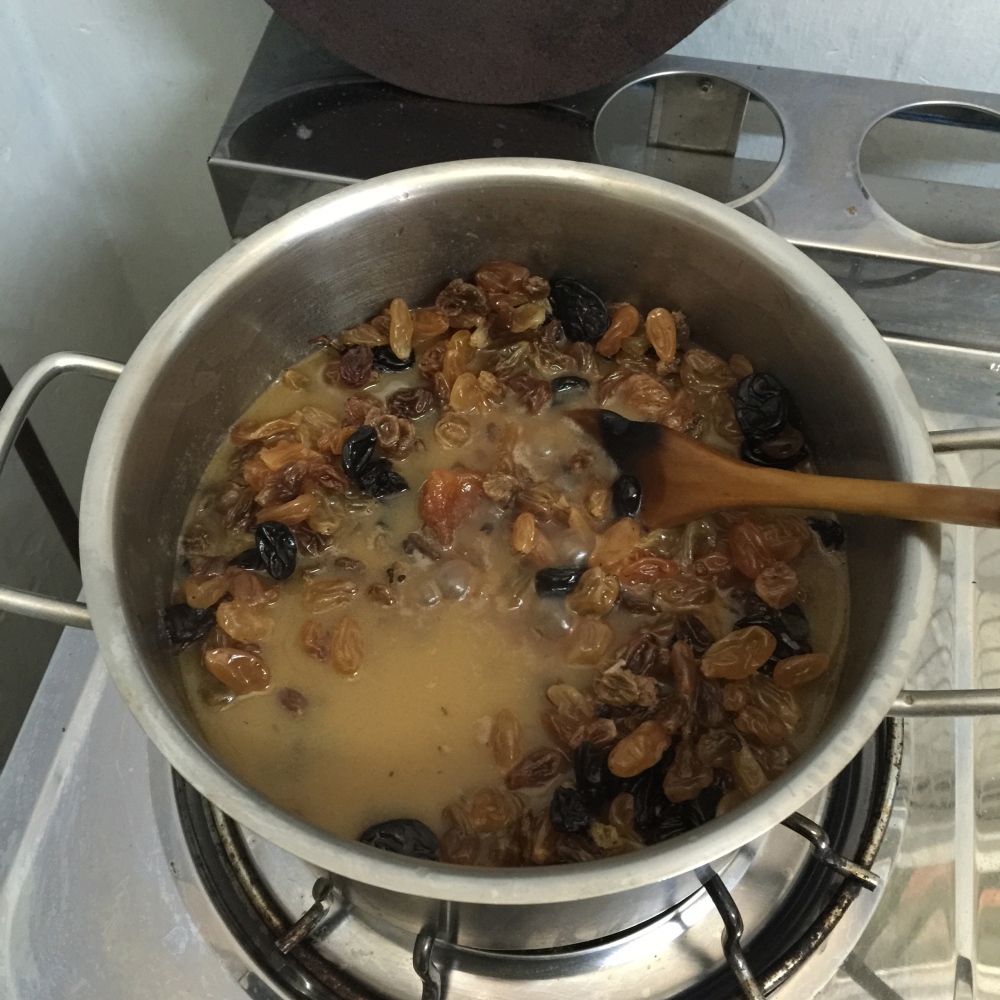 And this is the weird part of this recipe. I find the texture of the cake is much better when this part of the recipe is done as fast as possible with the mixture still hot. Be aware that  the eggs could get ‘cooked’ as you mix them into the hot batter, so make sure your tins are prepared at hand & ready to put in the oven.

-Transfer the whole contents of your pot of currents into a large mixing bowl. 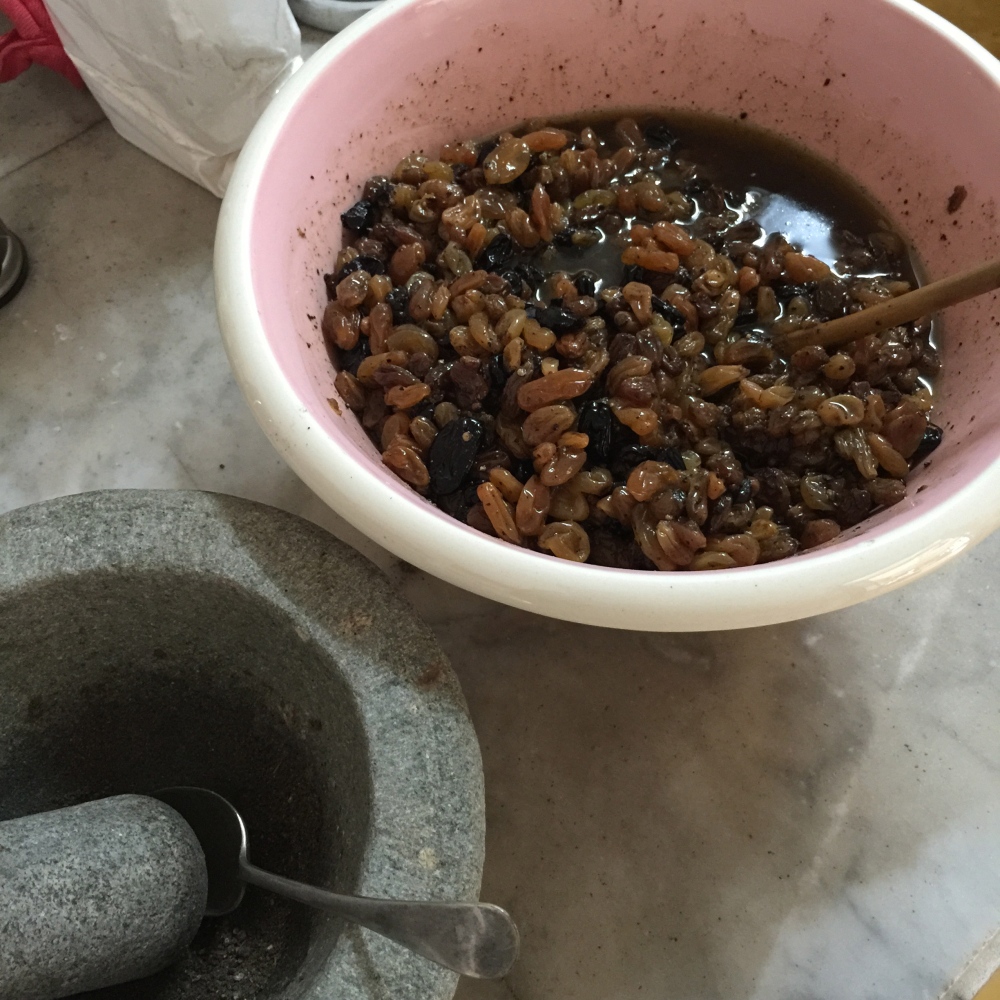 -In a separate mixing bowl, beat your eggs together & add enough self raising flour so that you have a thickish batter. 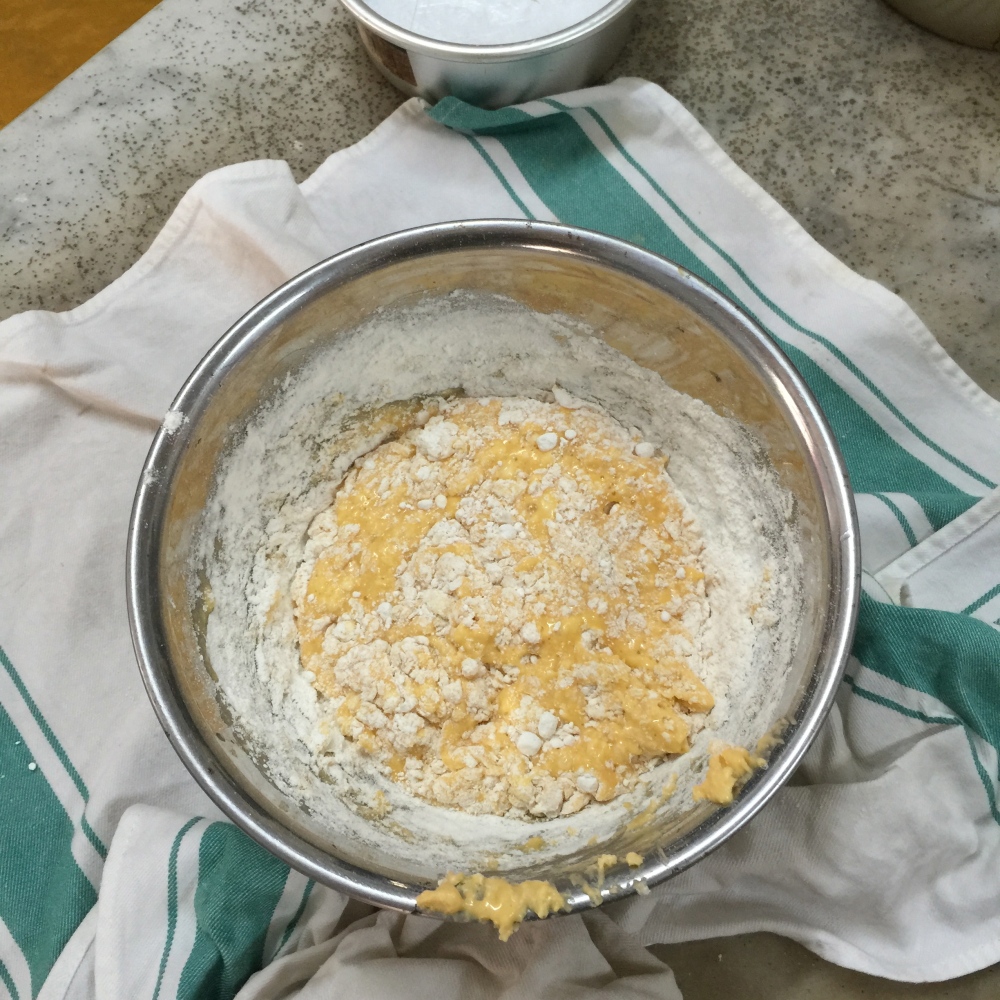 -Sprinkle a little flour over the top of your hot currents, stir into the mixture. 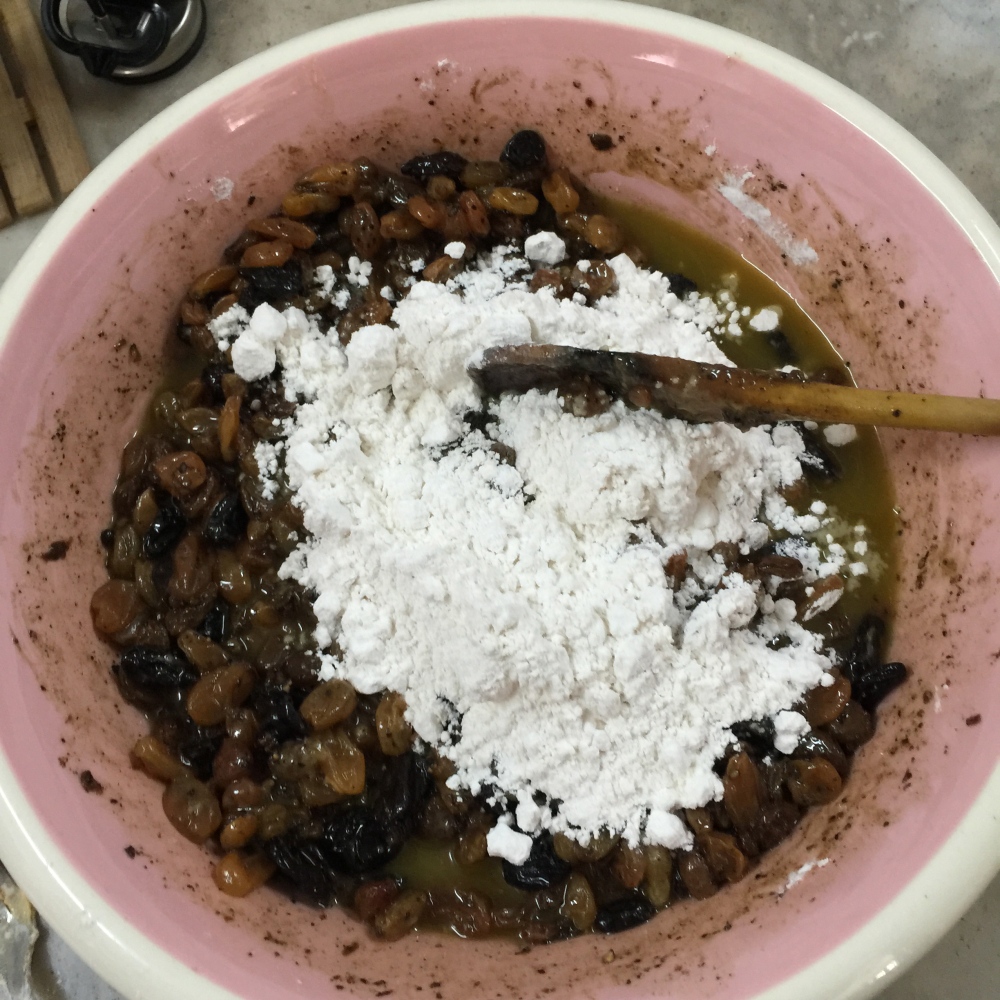 -Then as fast as possible, dump the egg and flour batter over the top of your currents and stir in as fast as your arm is able. The batter is very heavy & its hard to work the wooden spoon through everything…but you need to do this as soon as possible, mixing properly, stirring up all the warm liquid at the bottom of the bowl. 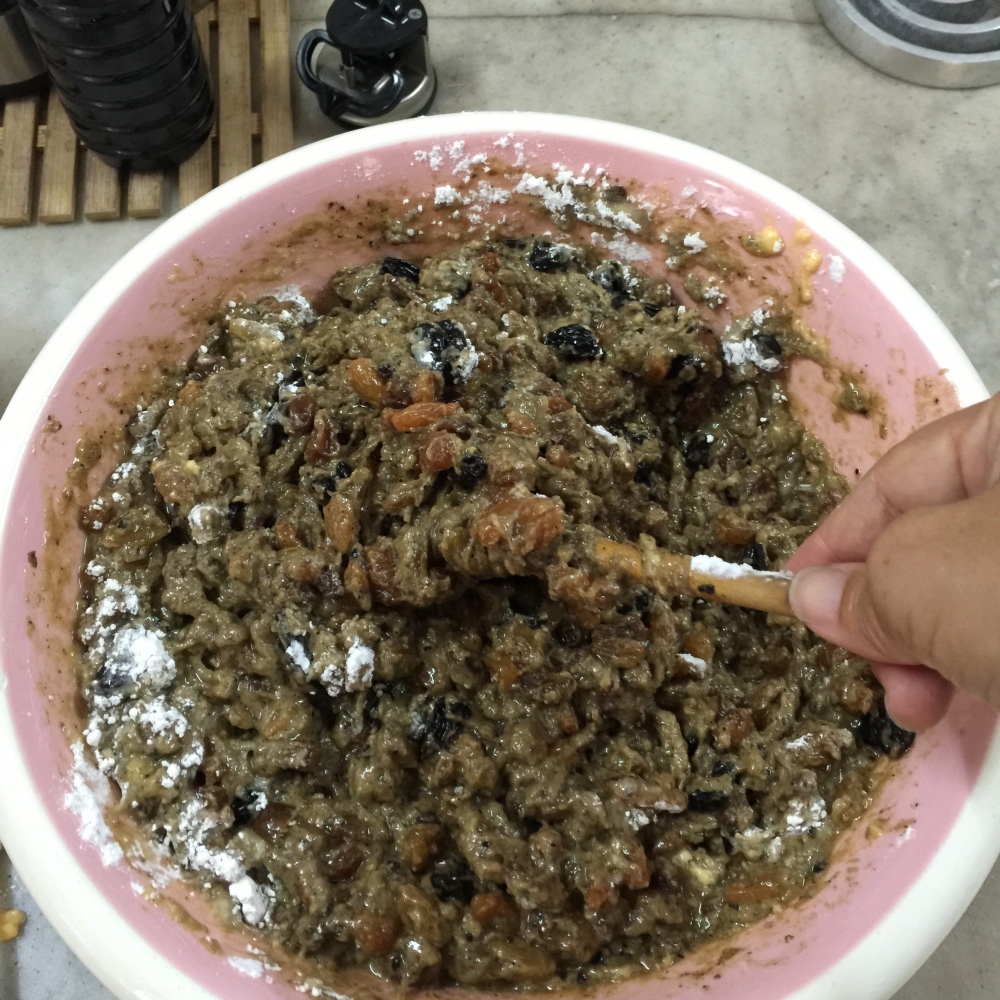 You end up with a thick mixture, heavy & gloopy. The batter is there just to keep the currents ‘locked’ together as it cooks. I have found, making these cakes many many times, that they will be good, even if you make the mixture slightly runnier. If it is runnier, you need to make sure there’s more batter in proportion to the currents, or else your finished cakes won’t have an even amount of peppery ‘binding’ throughout. They will be nicely ‘bound’ at the bottom of the cake but just loosely ‘current’y’ at the top. 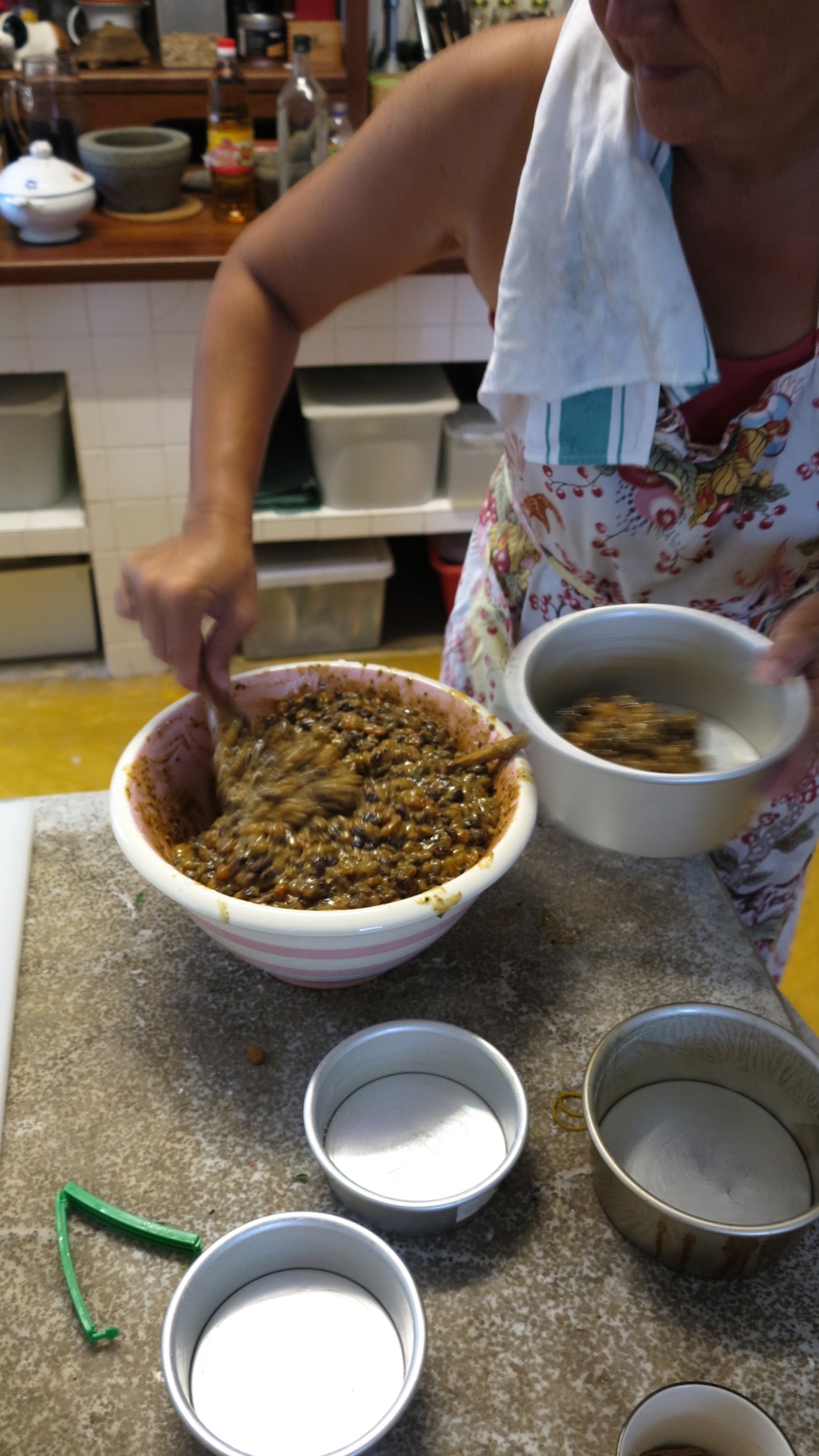 -Divide your batter between your tins, knock them heavily on your kitchen table to help level out the batter, and get them into the oven ASAP. On cooking they do not rise very much so make sure you are happy with their depth in the tins.

-As they cook keep a little watch as the exposed currents on top can get singed a little. You can adjust the heat down a little if you like. Once done, a knife put through the centre should come out clean. About 40 mins depending on the size of your cakes. 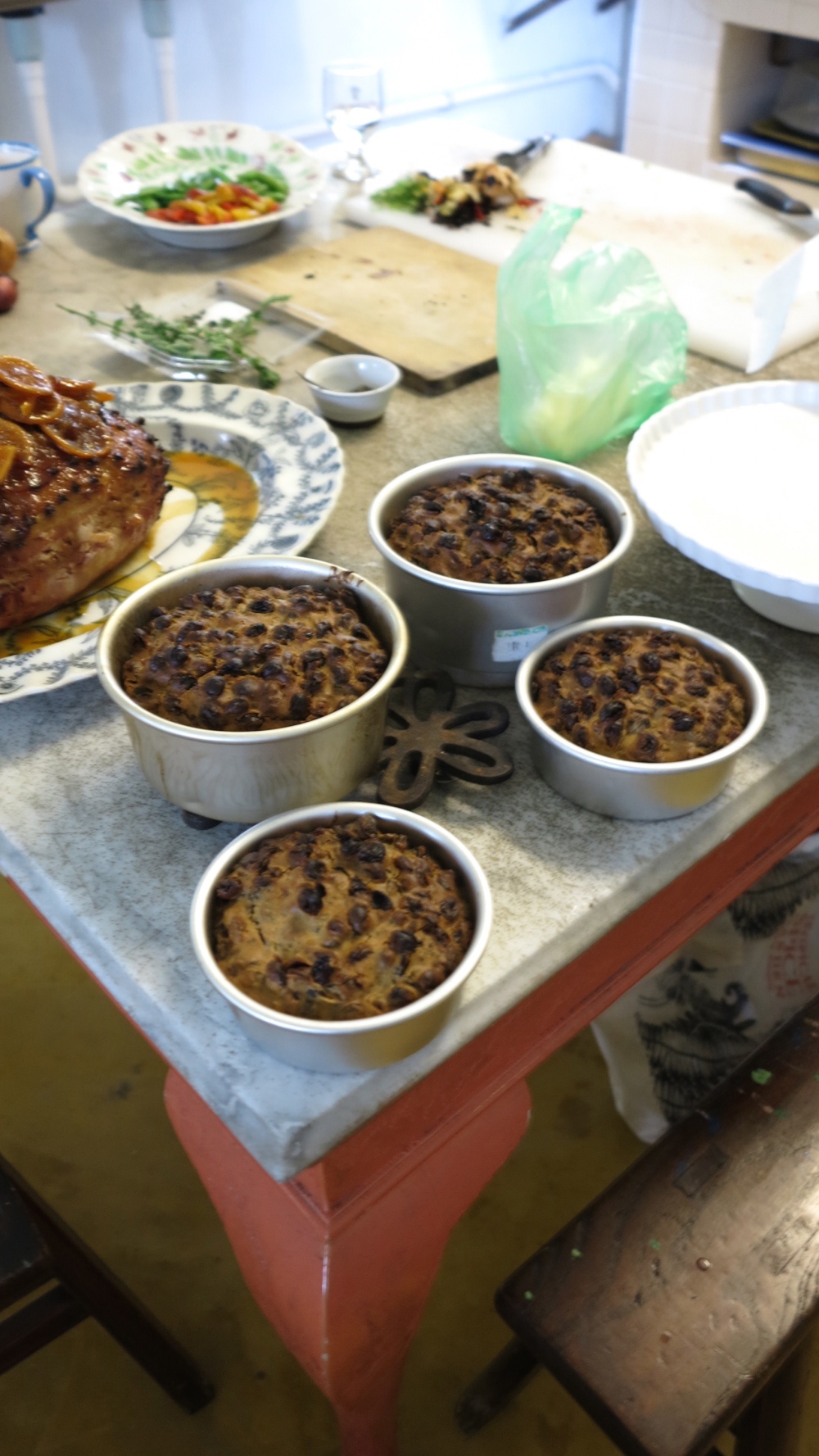 -Let the cakes cool before you knock them out of the tins. To keep them in the fridge or freezer, wrap them tightly  in baking paper, then waxed paper, & store.

Note: Hot out of the oven, they are also great with good quality ice cream as a dessert.

Go check out the pepper vines at The Tropical Spice Garden, Teluk Bahang Penang and learn a lot more about what other spices Penang is known for. You can buy fresh pepper at their retail outlet at the Tropical Spice Garden itself, or at Tropical Spice Garden In The City at 29 China Street in the heart of George Town, Penang. They are also the only outlet selling real cinnamon in Penang, imported directly from Sri Lanka. Its a whole different ballgame to cassia, which is commonly and widely sold and packaged as ‘cinnamon’.   http://www.tropicalspicegarden.com

This morning, a peak at the sunrise from the upstairs window & through a break in the trees . . . #sunrise
#pollination #cannonball #penangpark
We have an amazing swarm of bees on our golden lantern tree at the moment. They are in transit, absolutely calm & just waiting for the right time to move on. I’ve put a big saucer of water at the base of the tree today in the hope they can find it & drink. It is so hot for them & this weather could be totally detrimental to them. Yesterday afternoon a fire engine & vanful of very young, fit & smart firemen pitched up outside our gate. They had been called to come & burn out this swarm by the neighbours. The tree is well inside our garden. I spoke with them & the firemen knew.....this swarm is in transit. They are honey bees. There we were nearly 20 of us & the bees were calm, not flying or buzzing & none of us got stung. The firemen ( thank you young men from #Bomba) showed some knowledge of bees. The neighbours or rather their managers showed none, & wanted to burn out this beautiful harmless swarm in a time when bees, so important to all of us, are in danger. We have these swarms come & rest & transit in the trees in our garden on a regular basis. I worry for them always, anywhere, because of the ignorance of people. Fear is their first reaction. ‘Kill it’ is the next. On China Street when we lived in town, we had swarms build in our courtyard on the pot plants. Not once were they aggressive, not once were they disturbed by our everyday goings to & fro. Leave them alone & they leave you alone. Bees are totally cool. . . . #peacefulbees #beeswarm #hiveonthemove #naturalmigration #beesintransit #donotkillbees #beesindanger #firemenarecool
Pongal! How wonderful was it to be in Little India early this morning to watch the setting of wooden fires to cook the overflowing rice pots! Rice, jaggery sugar, cashew nuts, spices all boiling under a triangle of sugar cane stalks & colourful rice powder drawings of the kolam patterns. Everyone dressed in their best. Just beautiful! . . . #pongal #harvestfestival #ricepot #sugarcane #tumeric #ricebubblingover #abundance #overflowingpot #woodfires #littleindiapenang #localfestival #localcolour #earlymorningsreaprewards #anabundanceofgoodfortune
This wild boar family hangs out around @tigerrock_malaysia . They are calm but curious & like to be where the action is. Rascals though....digging up the lawn- all the time- digging out the lovely spider lilies just when they are in full lush mode, & eating the bulbs.....but we share the jungle with them & they love the treats that our attempts at gardening provide! . . . #superchilledwildboar #wildboar #sharingtheirjungle #jungleliving #tigerrockanimals #tigerrockwildlife #inthejungle
Meanwhile, on arrival back in Penang our Amherstia nobilis has sprouted a seed! It’s only produced a seed 1 other time so it’s exciting stuff! Hope it reaches maturity! . . . #amherstianobilis #seed #waringan #prideofburma #beautifulbloom #tropicaltree #inmygarden